Metaverse Marketing: Beam Me Up


Decentraland is a magical, mystical place with surprises lurking around every virtual corner. Big names like Samsung and Miller Light are already using Decentraland to host virtual activations that create and strengthen consumer-brand relationships. Make no mistake, this is the next evolution of ecommerce.

Decentraland offers an immersive space that can be used to curate compelling virtual experiences for consumers. The metaverse marketing tactics being used here are on the bleeding edge of digital marketing.

As I continue to explore new virtual developments and hunt for innovative marketing ideas, I will be sharing some of my most promising discoveries through a series of publications titled “Metaverse Marketing”. Whether you’re an eager young marketing professional or a curious boomer, feel free to follow along and join me on my metaverse marketing journey.

At the beginning of the month, I officially entered the metaverse. I had been in metaverses before, but only as a tourist. This time I was in Decentraland on strict business. I was scouting for fresh ideas to implement into my company’s newest metaverse project, Petaverse, the first official metaverse pet company.

I started by consulting with my good friend Jake, who writes research reports on metaverse real estate and covers exciting Decentraland developments in his Metaverse Explorer series. Jake was kind enough to recommend some must-see attractions for a metaverse noob like myself. The day was April 20th, 2022, and first up on the list was a 420-themed party at Xetaplex, a popular Decentraland event venue.

My first impression of the event could be described using one word: weed. From weed skins to fluorescent weed disco balls, there was no shortage of weed-themed decor. Only once I took a step back to tone down the graphics lag did I begin to see the bigger picture.

This wasn’t just another 420-themed party, it was a highly coordinated event promoting metaverse DJ Jack Frost’s latest hit single “Beam Me Up,” a first-person comedic recount of Jack’s experience of going through airport security with marijuana. 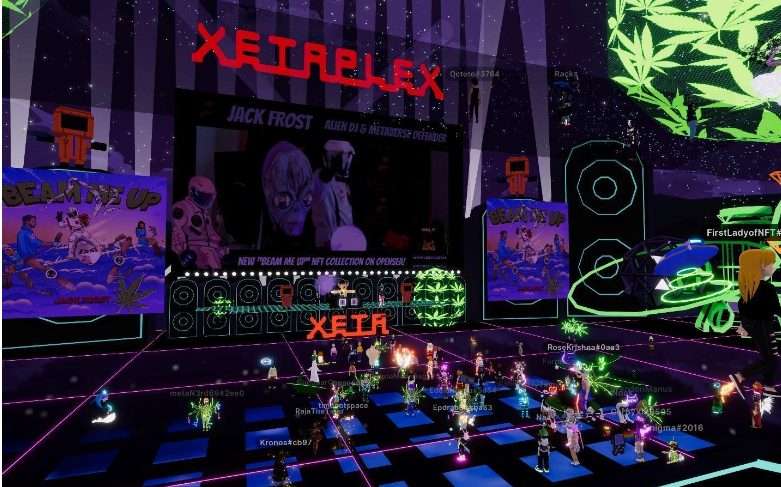 Xetaplex Venue During the Beam Me Up 420 party

The first thing I noticed at the entryway to Xetaplex were the posters. 2D Posters displaying the cover artwork for Beam Me Up peppered the dance floor and perimeter of the venue. When clicked, the posters hyperlinked out to Jack’s NFT collection for the event.

The NFTs featured the cover artwork and audio for Beam Me Up, but they also doubled as tickets granting visitors admission to the event. You could still visit the venue without a Beam Me Up NFT in your crypto wallet, but the audio-visual components of the concert would be concealed to you.

When I first arrived at the concert, I hadn’t yet purchased a ticket. I found myself standing amid hundreds of dancing avatars but feeling alienated. I likened this to removing your headphones at a silent disco. Everybody around you is vibing to the music and you’re just lost in an ocean of silent swaying bodies.

Even in silence, I could still sense the energy of the crowd. The FOMO was beginning to set in, but I wasn’t quite sold at the 0.05 ETH ($120) price point. I needed something more compelling to paint a picture of the experience and show me how it would feel to be one with the crowd. I started combing through Twitter hashtags for the event, looking for inklings of video from ticket holders.

I searched and searched to no avail. Eventually I plugged back into the metaverse and began wandering around the venue looking for clues. I clicked on one of the Beam Me Up posters and it directed me to the OpenSea NFT marketplace for the event.

An NFT of the Beam Me Up music video was front and center on the landing page of the marketplace. I clicked play and the video began. It was a goofy yet surprisingly catchy production featuring Jack Frost in a head-to-toe “astronaut suit” walking through airport security and into a private jet touting copious amount of bagged weed.

Following Jack were pilots, TSA agents, and attractive stewardesses all hoping to join in on the fun. When the jet took off, the party began. Lights flashed as Jack and his crew danced around the cabin of the aircraft getting lit and popping bands.

At that point, my FOMO gauge was redlining. I had to buy a ticket and experience this for myself. Fortunately, I was already on the marketplace and my ticket was just two-clicks away.

My introduction to the Beam Me Up event was relatively unconventional. It is likely that most of the attendees either discovered the concert through the official Decentraland events page (15k daily visitors) or they came across one of numerous social media promotions for the event. In addition to the occasional organic promotion, tons of people were Tweeting about the event for a chance to win Decentraland wearables during the show.

To be entered into the giveaway, visitors had to pose near one of several Beam Me Up posters, take a screenshot, Tweet the screenshot with the hashtag #BeamMeUp and tag @NftFrost. Users also had to include their ETH wallet addresses. In the case that they won; a limited-edition wearable item would be airdropped to the address provided. I counted at least 95 posts resulting from this promotion alone.

Since the event on April 20th, 2022, DJ Jack Frost has sold 28 Beam Me Up NFTs at an average price of $224.14 amassing roughly $6,275.92 worth of revenue, not including the recent sale of the official Beam Me Up music video NFT for an additional $2,789.33. This is an impressive return for an artist who, at the time of writing, had only 73 monthly listeners on Spotify.

I can also conclude with reasonable confidence that there were at least 100 attendees to Xetaplex over the course of the event, and I know that promotions for the event received more than 200 engagements on Twitter alone. Jack Frost’s Beam Me Up concert was an obvious testament to the power of metaverse marketing.

Marketing strategist with a passion for emerging technologies. Currently helping disruptive brands bridge the gap between reality and the metaverse.