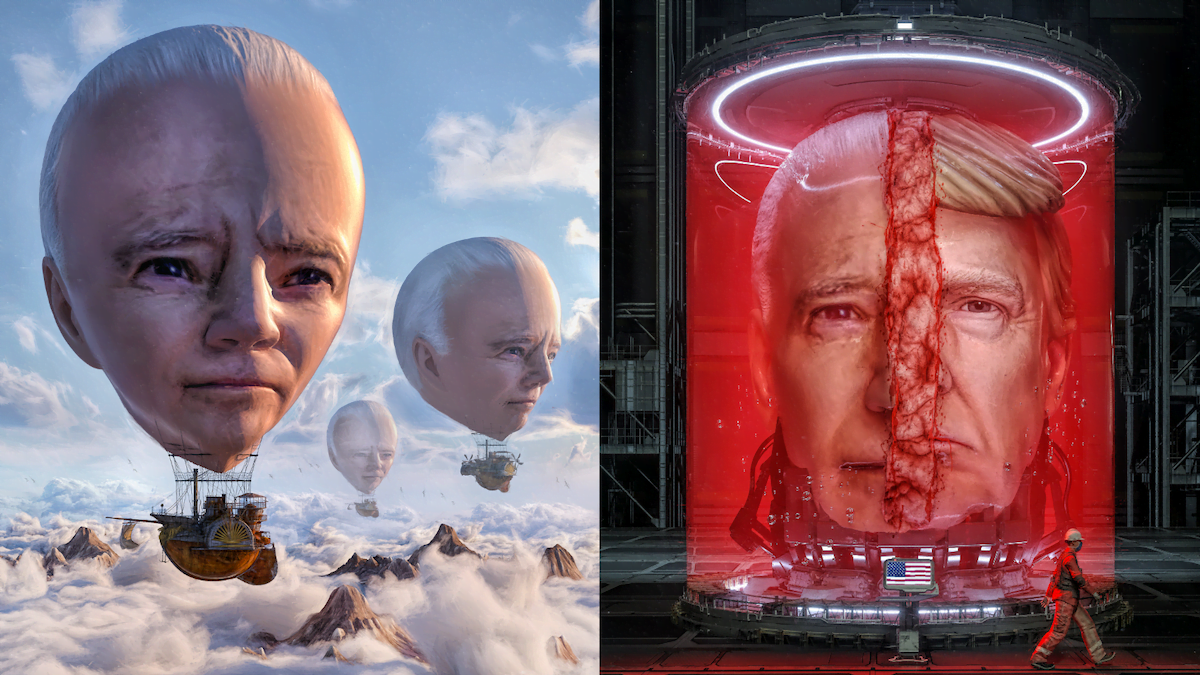 
Beeple, one of the world’s most famous non-fungible token (NFT) artists, has a long track record of ruthlessly taking on celebrities, athletes, and public figures. Now, the creator has set his sights on U.S. President Joe Biden with commentary on a current issue.

As part of his everyday series, Beeple, also known as Mike Winkelmann, released two images of the president on Twitter. The Sunday image was captioned ‘Inflation’ and featured a blue sky, puffy white clouds, and hot air balloons in Biden’s likeness filling the frame.

The hot air balloons were almost certainly a dig at the president, who has struggled to cope with the rising inflation that has marred his presidency. Inflation continues to be a hot-button issue among voters and is part of the reason Biden’s approval numbers have sunk.

With an election just over two years away, inflation and what Biden does about it could play a huge role in whether he gets re-elected.

The artist’s Monday image spotlighted Biden and former President Donald Trump and was entitled ‘American Experiment.’ If you are a celebrity, politician, athlete, company, or just about anyone in the public light, consider yourself fair game in Beeple’s eyes.

Another of Winkelmann’s famous images had Russian President Vladimir Putin on the end of a tank with the caption reading, “F*** Putin.’ At VeeCon 2022, he told the crowd that his Everydays collection has only garnered one cease and desist letter.

So far, the Putin, Biden, and Trump images are not for sale. There is a possibility that they will become part of a larger collection. However, Beeple has been mum about what his intentions are.

Why does all this matter? Winkelmann’s first 5,000 Everyday NFTs sold for a whopping $69 million in Ethereum in March 2021. According to Christie’s, where the collection was auctioned, that figure put Beeple “among the top three most valuable living artists.”

Until October 2020, the most Winkelmann sold a print for was $100. From late 2020 to spring 2021, Beeple saw increasingly valuable auctions while selling series in October 2020, December 2020, and February 2021. The series sold in February was originally purchased for $66,666.66 and was resold for $6.6 million. Beeple’s work wasn’t the only NFT to sell for millions of dollars.

NFTs are unique files that live on a blockchain. They can confirm ownership of a work of art, and buyers usually get limited rights to display the digitized art they represent. However, in many ways, buying NFTs gives the holder bragging rights and something they can trade or sell later.

Why has Beeple’s work become so valued? First, he built an enormous following with millions of followers across social media. Another factor is, as seen in the Everyday Series, he is monstrously prolific, giving fans more and more content. The Everyday Series is now in its 15th year.

Then there is the general rise of NFTs as viable forms of cryptocurrency. They are now the way digital art is acquired, bought, and traded globally.

DapperLabs Strikes up Official NFL Partnership with the L.A. Rams