Historically, NFTs date all the way back to when digital artist Kevin McCoy minted the first NFT art named Quantum in 2014 on the Namecoin blockchain. Since then, hundreds of thousands of NFTs have been minted on Ethereum and other blockchains. NFTs can be a piece of art, GIFs, animation, videos, photographs, music, journals, domain names, etc.

NFTs went mainstream in 2021 and became a recognized niche in the decentralized space. This ushered in many investors as individual creators and companies started launching their NFT projects. One of such companies is Yuga Labs, a blockchain company specializing in NFTs that developed the notable Bored Ape Yacht Club – BAYC.

What is the Bored Ape Yacht Club?

When the NFT collection was launched on April 29, 2021, the sales were initially sluggish until May 1, when a notable NFT trader, Pranksy, purchased many Apes. He then informed his followers on Twitter, and his tweets led to selling out within twelve hours, making it to be available for sales afterward on the marketplace where NFTs are publicly traded.

All Apes are unique, but some are rarer than others based in their attributes. Each Bored Ape is algorithmically created from over 170 potential attributes, including expression and wearables like clothing and accessories. For example, the collection has various furs, clothing, jewelry, facial expression, and others. Only 115 Bored Apes have a cross earring, 49 have daggers in their mouth, and 108 have cybernetic eyes as part of their unique traits.

Why are Bored Apes Worth So Much?

The launch price for Bored Apes was pegged at a fair price of 0.08 ETH – about $190 at that time – so no Ape costed more than others, irrespective of their traits. Three months later, NFTs started gaining more ground, increasing their value.

Who is Behind the Bored Ape Yacht Club?

BAYC was created by Yuga Labs and co-founded by Wylie Aronow and Greg Solano. The duo was popularly known by their pseudonyms Gordon Goner and Gargamel. They later enlist Kerem aka No Sass, and Zeshan aka Emperor Tomato Ketchup, to form the BAYC in late April 2021.

Kerem and Zeshan were software engineers, while Gordon Goner and Gargamel were both artists; Gargamel had a Master of Fine Art (MFA) and Gordon Goner dropped out of MFA for health reasons.

Who Drew the Bored Apes?

Unknown to many enthusiasts, the quartet of BAYC were not the designers behind BAYC; they only birthed the idea. An Asian-American artist Seneca, popularly known as All Seeing Seneca, drew the primary characters.

Though she wasn’t familiar with NFTs, Yuga Labs accommodated her and gave her their concept to develop a character. Yuga Labs wanted “Punk Apes” but had no idea what it would look like.

The BAYC, ever since its launch, has kept its entire community engaged with captivating activities to keep the club alive, rather than boring those who aped (jumped) into their project. Below are the periodical new elements released to its ecosystem to engage members and keep an OG status.

The bathroom is the first significant engagement with club members. It is a digital replica of a private physical planning board or whiteboard where members can freely write whatever comes to their minds on the wall. The concept behind this private bathroom is to create a shared digital canvas where club members can draw on it, so the bathroom is exclusive to members only. 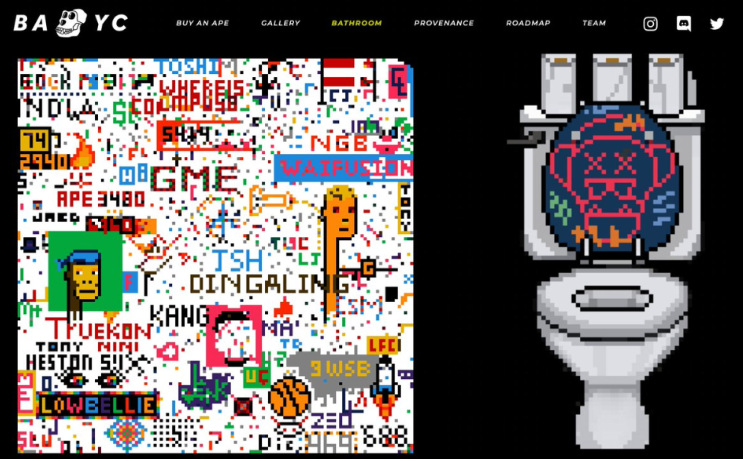 Another intriguing engagement is the dog adoption concept, where each Ape can freely adopt a canine so they don’t feel bored and lonely in the swamp. The Kennel Club allows every Ape to adopt a dog from its club as a companion for free – excluding the gas fee. The offer ran for a week in June 2021, where members who signed up for this adoption got their respective distribution at the end of the adoption period.

About 96% of Bored Ape holders adopted a dog companion, and the remaining 400 unadopted dogs were left to the swamp for extinction. Since then, these dog NFTs have also been listed on marketplaces since they are no more available in the Kennel club.

The BAKC collection incorporates charity donations into NFTs, with the 2.5% royalty fee placed for six weeks after launch. Funds from the royalty fee were donated to animal charities like the Orangutan Outreach, as announced by the BAYC official Twitter handle in August 2021.

Another captivating model for engaging the BAYC members that was introduced to the ecosystem is the Mutant serum airdrop. A snapshot of Bored Ape holders was taken on August 8, 2021, and each holder was airdropped with a Mutant serum vial.

A collection of 10,000 Mutant Apes was already auctioned and sold out before the mutation began. The mutation was a way of showing gratitude to BAYC members who minted Mutant Apes for free with their serums. The serums airdropped were M1, M2, and M3, where the Bored Apes could only use each vial once.

The M1 and M2 serums mutated Bored Apes into Mutant Apes with traces of the original Bored Ape traits. The M3 vial mutated the Bored Ape into an unrecognizable Mutant. Alongside the 10,000 previously minted Mutant Apes, this sums up the 20,000 collections of Mutant Ape NFTs, and the Mutant Ape Yacht Club was created therein. 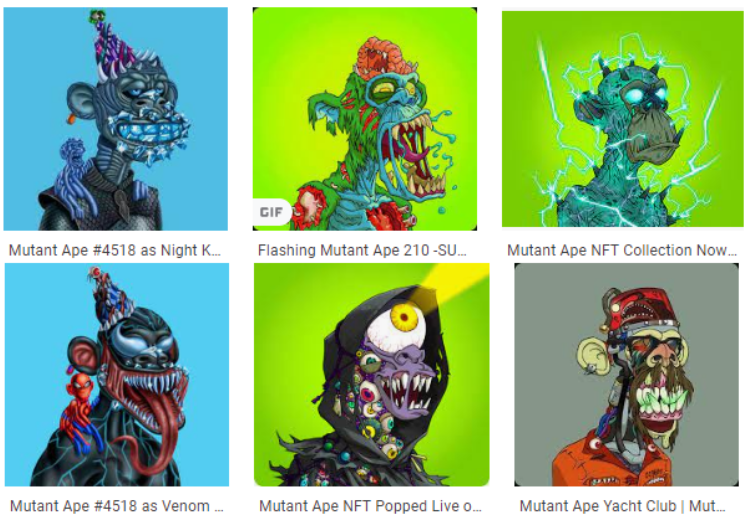 Celebrities have become a significant game-changer in the crypto/NFTs industry, doubling as media influencers for projects. An example is the Pranksy tweets that led to a substantial sale of the Bored Ape NFTs. Many celebrities have since acquired this NFT and flaunt them in the media.

Community plays an essential role in the success of many projects in the blockchain industry. A project’s community doubles as its foot soldier and influencers. BAYC meet-ups have been held in Hong Kong, New York, California, and the United Kingdom.

Another factor that made the BAYC valuable is its utility to its NFT holders, such as membership to the club, the bathroom access, and free NFTs and membership to the BAKC and MAYC. As the Yuga Labs team keeps working tirelessly to create other utilities, existing members have a lot to benefit from future projects. An example of this is the ApeCoin tokens distributed to Bored and Mutant Apes holders.

Bored Ape holders got 10,094 $APE for each NFT, while Mutant Ape holders received 2,042 $APE. Imagine if a holder is holding multiple NFTs of both collections.

Other Projects by Yuga Labs

Yuga Labs started its blockchain/crypto journey in less than two years, and the company is currently worth billions of dollars. Their success can be ascribed to working tirelessly to keep reeling out captivating blockchain/crypto and NFT projects.

Among their other projects are the $APE cryptocurrency and Otherside Metaverse alongside its Otherdeed NFTs.

Technical writer, an enthusiast for everything blockchain and decentralized world.